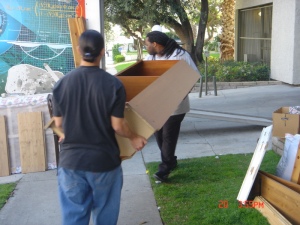 I’ve just encountered something quite amazing. According to Ben Wattenberg, The TFR (total fertility rate) is declining not only in the west but world wide. The current world population will grow from 6 billion to 8 or 9 billion and then decline. Already countries such as Iran, Brazil and Mexico are experiencing a declining TFR reaching 2.1 –the magic number in demographics measuring the number of births necessary for a population to replace itself– or better.

What do you think? Does this matter?

on a personal note…As some of you know, after six years of living in an apartment near Koreatown in Los Angeles, we finally moved into a house. My wife and I intended to move ourselves. We made little effort to recruit help but still they came.

Q: How can one recognize a friend?

A: When they ask you if they can help you to move.

Get this…a guy from our apartment complex came up to us and asked how we got so many people to help us. He had called twenty friends and only two showed up to help him when he moved he said. I stood there not knowing what to say. “We have a great church,” my wife told him. “That explains it,” he said. Darned, I had the answer to that one I just couldn’t find it in time.

One response to “Global Demographics”