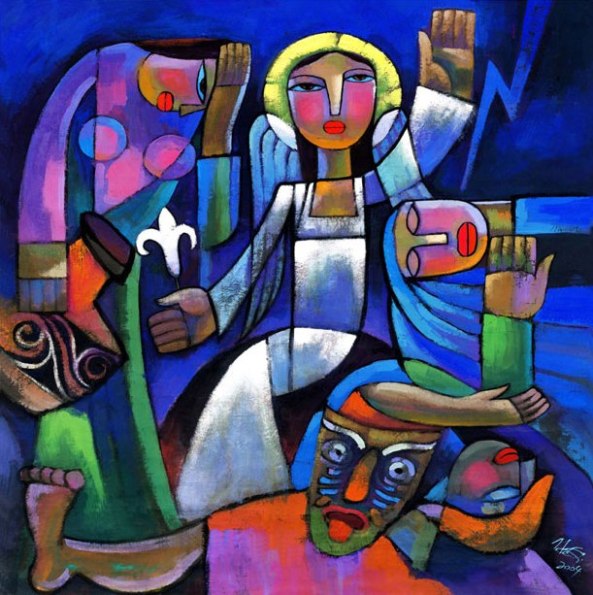 Reflections on Easter – The Voyage Home

It is an encounter with the future.

In the ancient world, according to New Testament scholar, NT Wright, while most believed in life after death, only the Jews believed in resurrection, and not all of them. The Sadducees famously did not believe in a resurrection and  tried to trip Jesus up with questions about what this resurrected life would be like.

Others, mostly the Romans, believed that some kind of disembodied soul would live on after death. (NT Wright believes this is one of the main misunderstandings of Christians today. This surprised me. I would consider faith in the resurrection to be a spiritual tattoo that distinguishes believers from nonbelievers).

So, if Jesus was raised from the dead, where did he come from? I suggest that Jesus came to us from the future.

This is weird because I don’t believe the future exists yet. So how can Jesus come to us from the future? On the other hand, I also know that the dead do not return. Yet, I am convinced Jesus rose from the dead.

So, there you go. The universe is not as I imagine it. It is much, much stranger.

In the future, we too will be raised like Jesus. That is, we are raised with a transformed physicality that has amazing new features and yet still continuous with who we are today.

So, Jesus is the first to be resurrected. He encounters us from the human future. Kind of like the crew of the Starship Enterprise in Star Trek IV: The Voyage Home.

In that episode, James Kirk and Mr. Spock must lead their crew to travel back in time to save Earth from impending doom. “Time” in The Voyage Home is connected. In order to save the Earth of the future, they must return to the Earth of the past. Future Earth is imperiled by alien probes that presumably are responding to distress calls that came from whales of an earlier time in Earth’s history.

The crew return in time to transport the extinct whales to the future so that (again presumably) they will communicate to the probes that their species has been saved.

The resurrection of Jesus means that the future of us is already breaking in. We live in the space between the first to be raised and the rest to be raised.

The task of the people of the resurrection is to be a “signal” to the present world of this approaching future. The good news is that this world is rescued from destruction and transformed to fulfill it’s creative potential. And we, as part of this world, will not live as disembodied spirits in heaven. We will bodily inhabit the new Earth. And we can begin now to live out this new ending.

Others posts in the Reflections on Easter series…
31 Days until easter 2015 — What Happened to the Other Guy?
The Walking Dead
One Thing We Know: The Dead Do Not Return