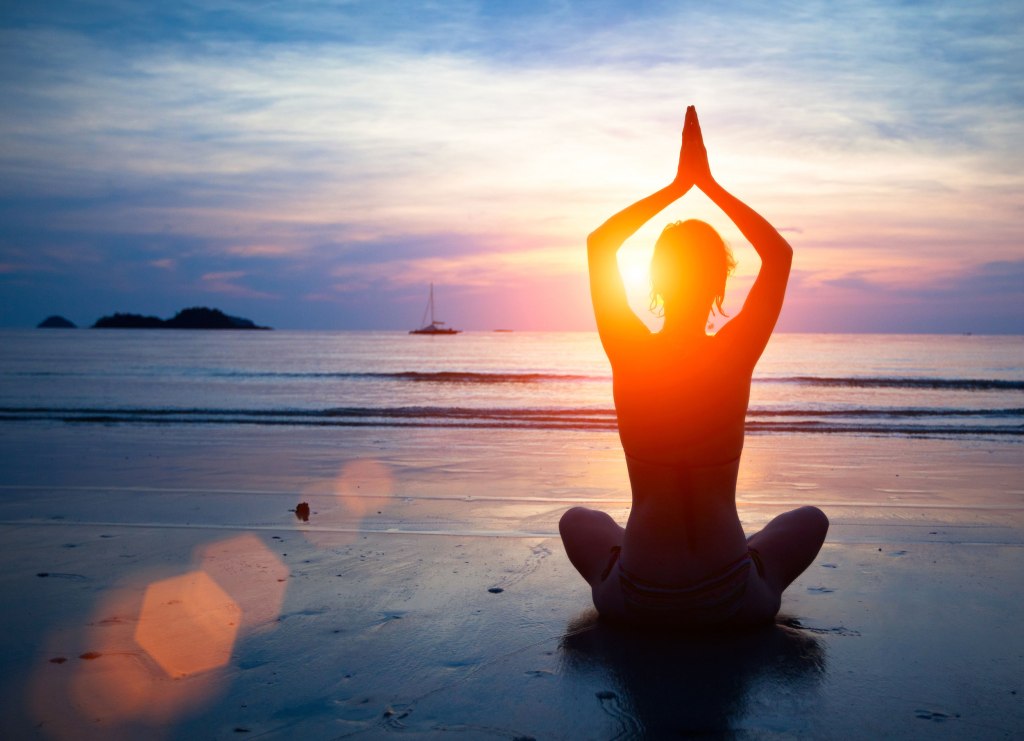 Catholic priests, according to Andrea Jain of Indiana University, are warning the flock about  the “dangers” of yoga. Many evangelicals have been doing this for as long as I can remember.

As I look around our culture, It’s obvious that the practice of yoga has become ubiquitous. Yoga pants are everywhere. And we as a culture are becoming more Buddha friendly.

But what is the greatest danger: Yoga or what we westerners will do with it?

I think that the practices of other religions are in danger of the American genius for branding and marketing everything. We will take almost anything and figure out a way to sell it and turn a profit.

Doesn’t matter what it is — Yoga, Meditation, Martial Arts, Breathing –we will market it and figure out a way to monetize it.

I think we should warn the world religions of the dangers of exposing their practices to America.

I have to interrupt here with a personal note:

I take this stuff seriously. I made a turn towards Christ through a deliverance from evil. That came as a surprise to me since I didn’t believe in “deliverances from evil” or Christ, for that matter.

So, I write this as someone who was a nonbeliever and is now on a journey towards faith in the God of Jesus. I sometimes joke that I am an atheist who is still surprised by his own conversion. And that’s no joke. (And, for an excellent complementary read, check out the excellent article on Yoga spirituality for Atheists).

The Christian practice is to take pagan things and give them new meaning. For example,

We baptized these pagan celebrations with the new meaning

Then we modern, free market, capitalists empty the newly baptized pagan practices, rebrand them, and market them: 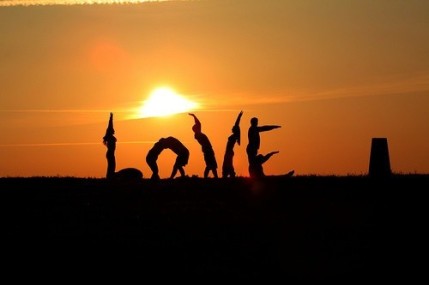 I think we have also started to make a case that religious practices can be dangerous to Christians –Christmas and Easter are two prime examples — because, even if they are detached from their original meanings, we infused them with new meaning. Why? Because the human is a religious animal, a meaning seeking creature.

We live in a complex world. We may take up meditation, dabble in buddhism, and become more peaceful. We may start going to church and become more hawkish, more martial. A good friend of mine testifies that using LSD in the 60s opened him up to Jesus Christ later. Not everything leads us in the direction we expect.

So, while Catholic exorcists are claiming the devil does yoga (and they may be right), I would add he also does Easter. And while priests are warning that tai chi endangers the soul (and it might), I would add so might Christmas.

Again, remember my personal note. I do think there are spiritual dangers in the world. Secularism, humanism, and atheism are clueless when it comes to evil. These world views are not good guides here.

At one Jan. 9, 2015 morning mass in the Santa Marta residence in Vatican City, the Pope spoke of that day’s gospel reading, and mentioned that only the Holy Spirit could open peoples’ hearts and free them to love, no matter how many catechism courses, spirituality courses, zen courses or yoga courses they took.

Now, I like the new Catholic Pope named Francis. I recognize that he tends to be a person of the “Left” intellectually and politically. (That’s pretty predictable for a latin american intellectual). Still, I think he’s spot on in his comments about connecting to God.

But some misquoted the Pope as saying that yoga would keep people from God. That’s not what he said. He includes Catholic catechism in his list of things that cannot do what the spirit does!

I agree with the Pope here. Only the spirit of God can liberate the heart to love.

Now I have to say that a much younger version of me would probably not trust today’s version of me. As a new believer I warned against Halloween, Easter bunnies, and Christmas trees because of their pagan origins. Today, I exploit whatever raw material is available to introduce the new meaning Christ brings. I was against anything that smelled of nonChristian religions such as buddhism, hinduism, or islam. Yoga was demon worship. Tai chi was invoking ancient spirits. Martial arts had the smell of ancestor worship. Today I appreciate the physical and mental health promoted by these techniques. The bigger shift was that I very quickly began to sense that Christianity presented as much or more of a danger to us than the “foreign” religions.

But, even though I am more open than ever, I do sense that we are in constant danger of being seduced by evil. Yogaphobia, for example, is a form of xenophobia, fear of the stranger. Xenophobia is an ancient evil. I argue in Makers of Fire: the spirituality of leading from the future that, according to the scriptures, God is on a mission to eradicate xenophobia from the face of the Earth.

So, these Catholic priests may be stereotyping a practice when they should be teaching both the commonalities and distinctions between the Hindu and Christian worldviews.

For an example of how to do this with emotional and cross cultural intelligence, check out the Mosaic teaching series, The Truth Between Us, by Erwin McManus. (Podcast available on iTunes). This series touches on the truths shared in common between Christianity and Islam, Buddhism, Hinduism, Atheism, Catholicism, Judaism, Scientology, and Mormonism. Here’s a link to the episode in the series relevant to yogaphobia, The Truth Between Us: HInduism and Christianity. The content is great, but the deep learning in the series is the emotional and relational intelligence that Erwin models for the Mosaic congregation. Listen to the whole series and let the attitude roll over you. You’ll experience the qualities that we must cultivate if we are to lead from the future.

The secularist press derides the Catholics for this “ridiculous” fear of yoga but we must remember that as secularists and atheists we know nothing about evil. This is a moral category that doesn’t fit well in these world views. As a result, the Catholic priests are way more right than the secularists here.

The Catholic priests have knowledge. They know that there is an evil waiting to pounce. They’ve just misunderstood evil’s ubiquity.

Evil is not lurking in the other religions –or in yoga– waiting for opportunities to enter our religion. Nope. Evil is already at home here. It is among us and available to us in our own practices. And “they” are in as much danger from “us” as we are from them. It is a distraction to point to the evils that may jump on us through yoga.

The Cart and The Horse

What is the relationship of evangelism to church planting?
In a recent post titled, “Dr. Wagner’s Cart Has Been Pulling the Horse for Too Long”, Neil Cole (author, Organic Church) writes about this relationship. END_OF_DOCUMENT_TOKEN_TO_BE_REPLACED

In my last post (Frameworks for Mission: Direction or Dogma) we looked at the experience of Cornelius as described by Luke in Acts chapter 10. I asked the question, Are we saved by cognitive acceptance of certain doctrines or by the direction of our lives?Â Â

END_OF_DOCUMENT_TOKEN_TO_BE_REPLACED

Â I received a question from a friend in the Philippines. I’ve paraphrased his question below.

Last week, I had a conversation with someone. While we were talking, he asked me if my insight was biblical.

I asked him, why does my insight have to be biblical? Isn’t that being fundamentalist? END_OF_DOCUMENT_TOKEN_TO_BE_REPLACED

Taking a Walk on the Human Side

The Turning to the Scriptures – Part 2

The four turnings are these:

We been talking about the 4 Turnings of the human heart that lead to the kinds of people Jesus needs in the 21st century. The third of the turnings is the essential turn to the scriptures. (Remember, these turnings can happen in any order).

Contexts and Trajectories for Faith

The canon, as I mentioned in the last post, is not revelation. Neither the canon nor the Bible are authoritative in and of themselves. But the collection of documents that have been passed on to us as the Bible do provide trajectories for a more human future.

When I speak of trajectories for the future I don’t mean a “Left Behind” kind of map to what will happen in the future. I mean a description of the human world we are called to create. END_OF_DOCUMENT_TOKEN_TO_BE_REPLACED

There is a spectrum of approaches for creating community with and among unreached people. Let’s draw from the world of technology for an anology.

Technologies exist on an opacity/ transparency spectrum. [Hat Tip to polymath and wordmaven Dean Sharp for the find].
An OPAQUE technology is one in which the technology being used is cumbersome or is
“in the way.” Posting a photo to your website using HTML is opaque. The HTML stands
between you and the task you’re seeking to accomplish. In a sense, you can’t “see” through
the technology to the photos you want to post. Opaque technologies require skills and capacities that do not come naturally to the user. For a more TRANSPARENT technology, think of using “Point to and click” technology to drag the photo of your choice into the page you’re creating. Using your finger to point is more natural to the user than typing HTML.
A transparent technology is one in which the technology is invisible. END_OF_DOCUMENT_TOKEN_TO_BE_REPLACED

In PART ONE of this Two Part post titled, The Mega Church and Home Church Networks: Twin Trajectories and Why We Need Them Both, I wrote the following:

There seem to be two leadership trajectories in the west. The first seems to be characterized by the recent phenomena of mega churches in the world. The majority of church conferences today are focused on this reality. The essence of these conference experiences seems to be a kind of corporate leadership guide for aspiring Executives of Corporate churches. Each conference introduces a new inductee to the role of mega church pastor-hood.

The excitement this type of environment creates for some makes others yawn.
END_OF_DOCUMENT_TOKEN_TO_BE_REPLACED