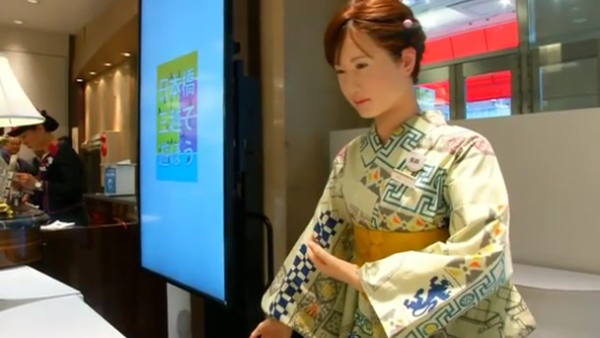 Imagine demographic studies of urban areas in the future. Might they one day include robot populations in their data?

Tokyo’s Robot Restaurant is a novelty eatery populated by robots. And, Henn-na Hotel, the world’s first hotel staffed by robots is open for business.

And now, with the introduction of RoboCab, Japan is leading the world in creating an entire society that accommodates autonomous vehicles.

We’ve recently discovered a planet that is very similar to Earth in orbit around a star very similar to our Sun. It’s truly exciting to imagine the possibility that somewhere in the universe there may be others who are both like and unlike us.

A recent Huffington Post piece titled, Earth 2.0: Bad News for God, attempts a preemptive strike against those believers who will try to “rewrite” history in order to accommodate the possibility of life elsewhere in the universe. The author, Jeff Schweitzer, is a Ph.D. in marine biology and neurophysiology. Here, in his own words, is the reason he wrote this article:

“let me speculate what would happen should we ever find evidence of life beyond earth even if you think such discovery unlikely. I would like here to preempt what will certainly be a re-write of history on the part of the world’s major religions. I predict with great confidence that all will come out and say such a discovery is completely consistent with religious teachings. My goal here is to declare this as nonsense before it happens. “

Makes you smile, doesn’t it?

The article is written as a “preemptive strike” against believers who will re-write history.

Not to get too basic here but “preemptive” means an action “taken as a measure against something possible, anticipated, or feared”.

It seems the Ph.D. in marine biology and neurophysiology came riding in to save the day, but the day had already passed.

Some religions, like Mormonism, will actually be reinforced by the discovery of Earth-like planets. Most Christians I know have world-views that easily accommodate life on Earth 2.0. They’re not waiting for some anticipated discovery to reassemble their beliefs. Their view of the cosmos is already big enough for other worlds. The worldview of many believers anticipates and expects life to flourish in the universe.

Ok, so the author didn’t know that religious people (and religions) are all over the map when it comes to belief in life elsewhere in the universe.

But he couldn’t leave it there.

He had to write the article with a narrow swath of fundamentalists in mind.

The reason this question comes (again) to my mind is that this article demonstrates that achieving a Ph.D. in marine biology doesn’t necessarily translate to reading and interpreting literature. Sadly, the author’s understanding of the Genesis poetry is as impoverished as the understanding of some fundamentalist believers. Perhaps even more so.

Nothing ever written contains a menu of everything that exists.

In order to evaluate a written piece, we must attempt to uncover the purpose for which something was written. That goes for pieces in the New York Times. It goes for Genesis.

The purpose of what we write determines what we include and exclude.

Both scientists, like the author of this piece, and fundamentalist believers should take a Humanities class. They would be enlightened by a course in comparative literature, or perhaps a class in poetry.

Genesis is not an inventory of the universe. It is a poetic peek into the meaning of the cosmos spoken in the words of people whose language did not contain the sounds needed to describe what they experienced in the wild.  I know you think that because you have a few new sounds which the ancients did not, you see more. But because of the way you approach this literature, you see even less.

Fundamentalist believers, same to you.

The Genesis community wrestled with the same questions that challenge us today. They hungered and thirsted for meaning. The discovery of Earth 2.o and the potential of life elsewhere in the universe doesn’t quench this thirst. It exacerbates it.

This is not bad news for God or religion because they’re not the issue here. It’s more basic than that.

The issue is us. The author of this piece sought to make a preemptive strike against religion and God, but it’s we who thirst to discover (or invent) meaning in the universe. We are the ones who interpret and reinterpret. We are the ones who are evolving and growing in our understanding of things. And as we invent new sounds (i.e. words) to describe what we see, it allows a little more light into the darkened lens through which we glimpse at God.

Technology is an extension of the hands of man.*

The power of humankind to hurt and to help are magnified by the technology we create.  It extends our reach.

Recently, Listerine commissioned the creation of an app that allows the blind to “see” a smile. This is an example of how technology amplifies our humanity. And this is just the beginning.

Kudos to Listerine. Sure, it’s marketing. But isn’t it an advance when corporations, who are rightly motivated by profit, tap into the best of what makes us human rather than the most vulgar and vile? Love this.

*For more thoughts on the “new trinity” — biology, culture, technology — see Makers of Fire: the spirituality of leading from the future by Alex McManus.

I’ve been following Brain Scientist, David Eagleman, since I heard him lecture at the PopTech conference about 3 years ago. I’ve pasted below two presentations. The first, Welcome to Your Future Brain, is Eagleman in 2012 on Bigthink about how technology can enhance human perception of reality. The second video, Can We Create New Senses for Human?, directly below the first is a presentation he made at TED this year. It’s fun to follow the progress.

And now the second video…

Thanks to missional maven, Alan Hirsch, global peacemaker, Bob Roberts, and professional futurist, Jay Gary, for their kind words featured in the Makers of Fire Video Trailer below.

Thanks to those of you who’ve purchased my book — now available on Amazon amzn.to/1rjTqzJ  — or have emailed me encouraging notes. Thanks!

And Man Made Life

The title of today’s post is the same as the title of the latest edition of the magazine, The Economist. Their full title is: And Man Made Life: the first artificial organism and its consequences.

A new world emerged recently and many of us missed it. On Thursday, May 20, 2010 the journal Science published an important announcement. For the first time since Genesis chapter 1, life has been created.