MAKERS OF FIRE: the spirituality of leading from the future
by Alex McManus

The longing for a new way to be human may be why so many in the USA, when polled about their religious affiliations, check the box “None.” We call them “the nones.” I know so many people of vibrant faith who classify themselves as “nones” because they’re detaching from traditional religious institutions in search of something more authentic. This is especially acute in the Christian faith because one is not born a Christian.

In the West, many have  forgotten how, and more importantly, why earlier generations came to believe. I suspect that the rise of those who identify themselves religiously as “nones” may reflect the rise of a deeper spirituality as much as it signals an abandonment of the institutions of faith.

In a recent conversation, a very thoughtful 25-year-old expressed this sentiment: “Even if all the claims of Christianity are true, I wouldn’t want to be a Christian.” Some have moved beyond their faith in Western Culture and it’s religion, Christianity. Because this person had at one time been a believer, I asked if there was something about faith that she missed. She informed me that she still believed that God hears her and that she had at one time heard from God, but she was no longer a Christian.

Where might this phenomena of the nones be leading us? It many ways becoming a Christian today may include a turn away from Christendom and the traditional churches that developed during that time. In fact, following Christ, for some, will mean not becoming a Christian.

To make an analogy with the life of Christ, Jesus was crucified by the Romans, then buried by friends. On the third day, he walked among his disciples again, raised from the dead. There were three days of “space” and “time” between the death of Christ and the resurrection of Christ.

Many today may be followers of Jesus who live in the liminal space after the death of the Christian religion but prior to the resurrection of an expression that can be  trusted again. Rather than rely on truth claims issued by an institution, it will try to remember how to trust again. Rather than institutional, the future of the Christ following faith will begin again as relational. 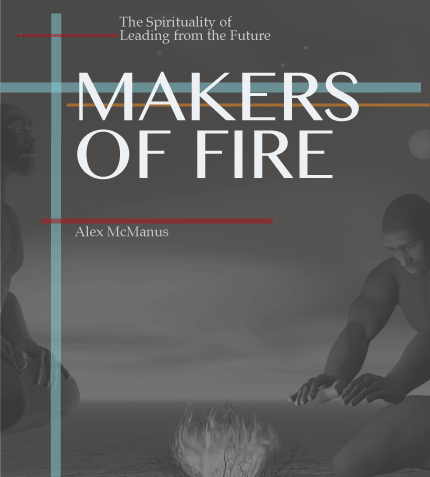 To borrow words from Jesus of Nazareth, these may be some of the seeds but we have not seen the tree. Some will fear the death of the seed. But if the seed doesn’t die, it remains just a single seed. But if it falls into the ground and dies, then it will reproduce itself many times over. (John 12.24)

The search for a new way of being human is the zeitgeist of our times, and many of us are going back to zero and starting again. This is a new  journey of discovery, a new time to seek, and our whole culture is on it.

MAKERS OF FIRE: the spirituality of leading from the future
by Alex McManus