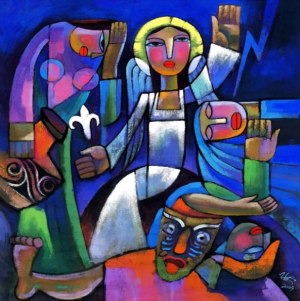 He Qi is one of the most popular modern painters of religious themes. Here a triumphant angel announces that Christ has risen, conquering the demons of darkness who now flee from him. The women have not yet woken properly, and seem unaware of what has happened. They still mourn, but the angel is telling them that the time for grief is over. Instead of the unfurled military-style banner often held by Christ in earlier paintings, He Qi’s angel carries a luminous lily, sign of purity and peace.

The Walking Dead is a very popular television series. The premise is that a virus spreads through the human race converting us into zombies. Given the recent Ebola scare, the idea of a pandemic that wreaks global havoc is not so far fetched. In the Walking Dead, zombies walk the streets of cities mindlessly and without purpose. That sounds remarkably like our real lives.

The band of survivors have one purpose: to survive. Our lives so often seem so empty of meaning that the idea of having such a focused purpose excites us. But we were created for far more than survival.

With 30 days to go until Easter 2015, I wanted to use this popular series to point out one thing the resurrection does NOT mean.

Resurrection does not mean the resuscitation of corpses. There were some in the ancient Greek city of Corinth that may have thought so. They wondered if the resurrection would be like The Walking Dead. Some of them may have used a Walking Dead scenario to scoff at the idea of resurrection.

Their doubts about the resurrection came in the form, according to the apostle Paul, of a couple of questions: “How are the “nekros” (the corpses) raised?” and “With what kind of body will they come?” (I Corinthians 15.35)

Lots of people believe in a “disembodied” or “spiritual” life after death today and the same was true during the time of Christ. This is not the scandalous idea that resurrection brings to the table.

Interestingly enough, our physical bodies are changing at the cellular level right now. Every 5-7 years we are entirely new creatures physically. Every cell that made up our bodies 7 years ago has died and every cell that makes up our current physicality is new. But we are the same person. In the resurrection Christ’s body erupted with transformative power and was made new, but it was still him. The resurrected Christ was the same Jesus the disciples and his friends and family knew.

Christ was not undead.
He carried within his new body new features suited for the new creation.
We will not be the undead in the resurrection.
We will be as the butterfly to the worm.
Alive with new bodies for a new creation.

Others posts in the Reflections on Easter series…
31 Days until easter 2015 — What Happened to the Other Guy?